Visual Islamic Art excludes the depiction of realistic human and animal figures. Geometric patterns that transform one to another world often become the focus of attraction. Precise reasons for geometric pattern becoming so central in Islamic decoration remain intriguing to many minds. Predominance of aniconism within monotheistic Abrahamic religions could well be a clue towards an understanding of the prominence of such patterns.

While geometric patterns that are simple and pleasing to the viewer dominate Islamic art, calligraphy and the minimum usage of foliage patterns of the arabesque (Islamic biomorphic patterns are usually called arabesques) can be seen within private spaces of homes and palaces.

The need to defend the unique status of God’s position as the ultimate power holder against idols, which were seen as threat to the uniqueness, led to the spread of the practice of aniconic art.

Geometric patterns make up one of the major nonfigural types of decoration in Islamic art; other two being Calligraphy and subtle vegetal patterns. The extreme complexity of geometric patterns within Islamic art is generated from such simple forms as the circle and the square. These simple patterns are combined, duplicated, interlaced and arranged in intricate patterns extending almost infinitely.

Reiteration of Qur’an implies that the divine nature of God is experienced through the divine word. Therefore, the absence of icons within a mosque is justified. However, the words of Qur’an is often extensively depicted on the walls and ceilings of mosques, palaces and homes giving rise to the rich traditions of Islamic calligraphy as an elevated form of architectural decoration.

Calligraphy manages to combine a geometric discipline with a dynamic rhythm. In the Islamic world it takes the place of iconography, being widely used in the decorative schemes of buildings. Seen below is a benign wording written in Arabic.

Vegetal ‘arabesque’ compositions are as common in Islamic decoration as geometric patterns. Similar to the geometric patterns, these are found across a wide range of mediums from illustrations in books to plaster work both interior and exterior and even in carpets and textiles. Leaves and climbers are the closest one can find in this kind of art form as the depiction of any creation with a soul is forbidden.

The basic shapes, or “repeat units,” from which the more complicated patterns are constructed are: circles and interlaced circles; squares or four-sided polygons; the ubiquitous star pattern, ultimately derived from squares and triangles inscribed in a circle; and multisided polygons. It is clear, however, that the complex patterns found on many objects include a number of different shapes and arrangements, allowing them to fit into more than one category.  The basic shapes are then repeated in many ways – the process known as tessellation – to create complex patterns that are so simple at its core. A tesselation is a decoration of a two-dimensional plane using the repetition of a geometric shape with no overlaps and no gaps; generally it can be extended infinitely in all directions.

Muqarnas (system of niches and projected ‘stalactites’, used as a transitional and decorative device in architecture), Mishkah (niche for a lamp), Lazo or Band-i-rumi (interlaced geometrical pattern) are some of the unique characteristics within Islamic art.

Other than stone, brick, wood and paper, stucco or plaster was widely used in Islamic Art. Plaster, a singularly useful material that lent itself to moulding and carving in a variety of ways, became a staple of Islamic architecture. Perhaps because of its plasticity as a medium it was less frequently used for purely geometric designs, and was more often used in vegetal-arabesque arrangements.

Stained or coloured glasses are used to create a heavenly experience within homes, palaces or places of worship. Designs the permit sunlight in the morning hours to enter the room from outside while providing a beautiful window view to an observer from outside during night time was mesmerising. The glass comes in four basic colours: red, blue, green and yellow. Movement of coloured patterns with the sun from dawn to dusk creates a dynamic ambience within the living space. Glasses are also used to decorate ceiling lanterns or wall lamps. 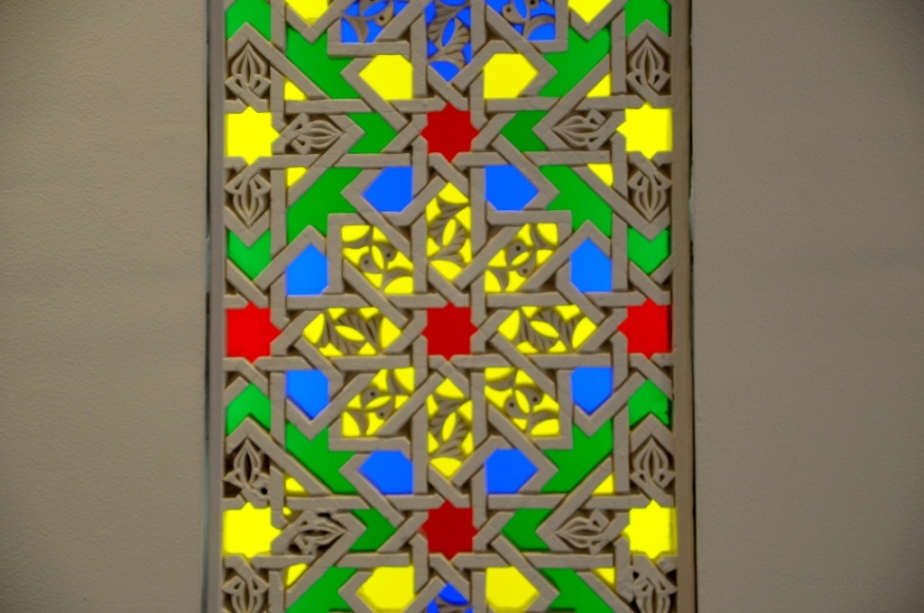 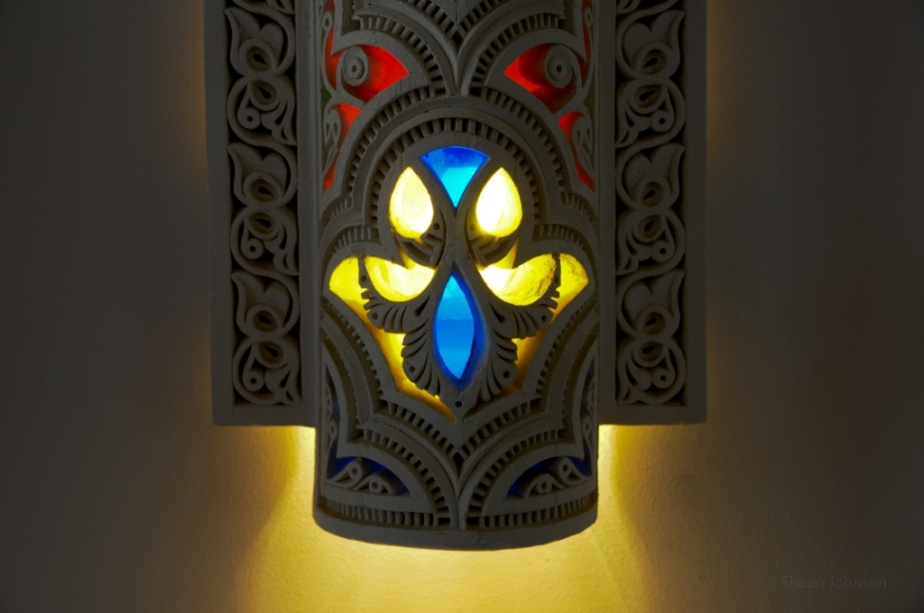 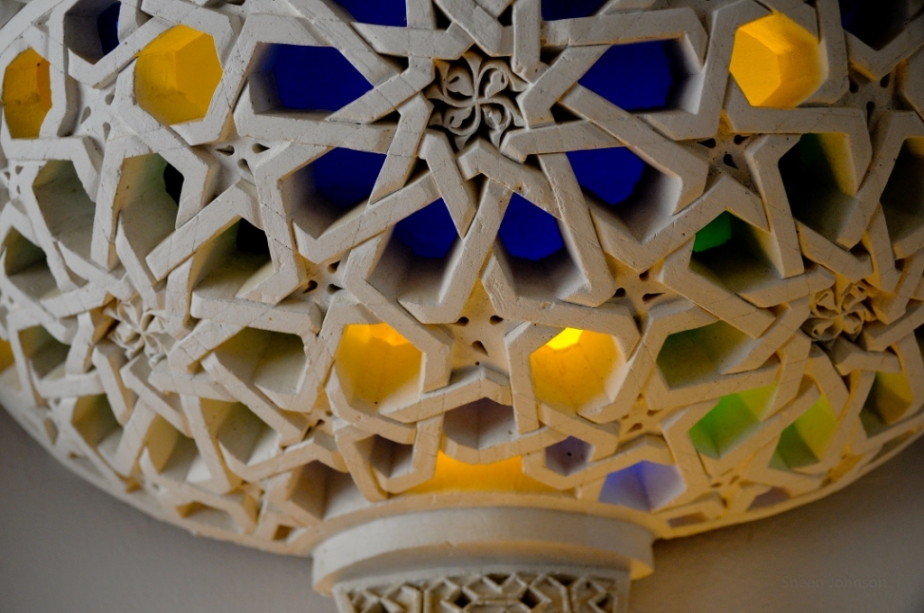 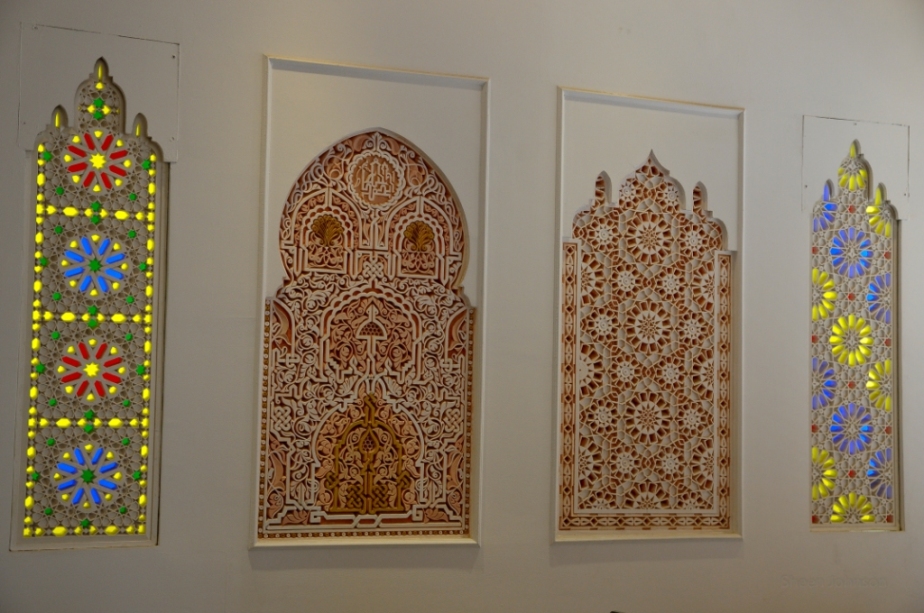 That the intricacies of infinite geometric patterns starts from a simple straight line, a point and a circle is perhaps the most unbelievable fact in the entire gamut of this marvellous form of art.